Military Options:
One of the less known components in the universe of college related choices is the military.  Military educational benefits are broad, varied, cost saving and include programs for studying while in college, after military service or even during military service.  Typically the military choices come in two forms, ROTC and the academies.  The academies have a long and distinguished history in the and have produced both great leaders and Presidents.  ROTC programs have not been around for nearly as long but have also distinguished themselves since their inception. 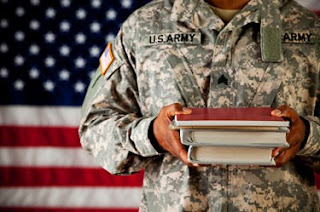 Reserve Officer Training Corps:
ROTC programs are offered at over 1,000 colleges and universities across the country and are designed to train qualified young men and women to become military officers.  Upon graduation, ROTC members are commissioned as 2nd Lieutenants in the Air Force, Army or Marine Corps or Ensigns in the Navy.  There are four-year and two-year plans, scholarships, financial assistance, and a variation for veterans.

What about the two-year program?
The two-year program is designed for junior and community college graduates, students at four-year colleges who did not take ROTC during their first two years of school; students entering a two-year post-graduate course of study, and high school students planning to attend military junior colleges. To enter the program students must first amend a paid six week Basic Camp. After successfully completing Basic Camp, students who meet all the necessary enrollment requirements may enroll in the Advanced Course.

Does ROTC offer scholarships?
Two, three and four-year scholarships are awarded on a competitive basis to the most outstanding students who apply. A 1200 combined SAT score with 600+ on the math portion will enhance your scholarship chances.  The scholarships pay for college tuition and fees and provide a specified amount for textbooks, supplies and equipment, as well as a subsistence allowance. They often give special consideration to students pursuing degrees in nursing, engineering, the physical sciences and other technical skills currently in high demand. For further information contact your local recruiter for information on the branch of the military of your choice on the ROTC program.

Military Academies
These include the in , , the in , , and the in .  Competition for admission to the Military Academies is amongst the most intense in the country.  In addition to superior test scores you will need demonstrated leadership qualities, excellent health, athletic skills and involvement in extracurricular activities to be in the running for an appointment.  You will also typically need a recommendation from one your state’s Representatives or Senators.

How do they work?
Students attending one of the Academies will live on campus, and have tuition, room and board provided.  They will also receive a monthly stipend.  In addition to a rigorous academic schedule which generally encourages a major in Math, Science or Technology, students study Military Science, drill and participate in physical training.  Upon graduation, USMA and USAFA cadets are commissioned as 2nd Lieutenants in the Army and Air Force respectively.  USNA graduates are commissioned as either Ensigns in the Navy or 2nd Lieutenants in the Marine Corps.  Graduates incur a commitment to serve in their respective services for a period usually no less than five or six years.

Choosing the military:
People join the military for a wide variety of reasons from service to their country, to family tradition to funding their education. Like any decision that is made concerning college and your future, choosing to attend a military program is one that should be discussed with your family and your guidance counselor.  You should consider not only your short term goals and opportunities, but also your long term goals, objectives and obligations.

You can get more information about military options online:

For ROTC Program information and links to each service’s site visit:  http://todaysmilitary.com/app/tm/get/collegehelp/rotc/rotcglance

For information about academy life and links to each school’s site visit:
http://todaysmilitary.com/app/tm/get/collegehelp/academies

Facts About the ACT

One of the many tools colleges use to evaluate students for acceptance is the ACT.  Given its importance in any application package we thought it would be a good idea to take a closer look at it.  With a little more information it becomes a little less daunting and that's a good thing! • The ACT is an ability test focusing on skills learned over time, so continue to work hard and retain as much information as you can. • You can re-test as often as you like, but no more than three times are recommended. • Colorado’s average score is 21 on the ACT. Scores can range from 1–36. You should know what range of score your school(s) of choice will want for admission. You can usually find this information on their Web site or by speaking to a counselor at the college or at your high school. • Remember that the scores you receive on these tests are only one indicator that your school(s) of choice will consider. • The ACT consists of four sections: English, mathematics,

Friedman: “We’ve Reached the 2nd Half of the Chess Board”

Some time ago I heard NY Times columnist Thomas Friedman give a lunch speech at a STEM conference in Denver. The thrust of his presentation focused on our rapidly advancing world and how technology is now advancing faster than our ability to grasp its potential, hence the comparison to the second half of the chess board. For students looking at college and life after college, technology will be prevalent in their lives but some age-old wisdom and grit will also continue to be necessary. While technology and automation will replace many functions of our lives, business leaders are looking for people who understand the technology but can match that with empathy for their clients and customers. Right now we can shop online with our mobile devices, request a ride using our cell phone and even have groceries delivered to our front porch, all without uttering a single word or sharing a simple interaction with another person. This might make our lives more convenient, but we st